Dusan Matic is a well known and respected goalkeeper coach, currently working with the Finland Mens National team. Dusan spent a week with the Champion of Greece DOUKAS SAC, and we asked him to share his thoughts with us, about the level and quality of Futsal in Greece.

Here is what he had to say:

What is your opinion about futsal in Greece?

Futsal in Greece is growing well. Year by year new young players appear. Panou take his role in Movistar Inter few years ago and he is a good example for all the others that with hard work they can reach the stars.

What does a Greek player need to work on, to become better based on your international experience?

They should be more focused and dedicated if they want to become better. Technical and tactical things with good physical preparation will get from their coaches, but goal setting depends only by themselves.

If you want to improve something you must put attention on it. I use to work with couple of Greek goalkeepers during last 4 years periodically and I can say they are very talented and on a decent level. But without CONSTANT work in their clubs you can not expect their growing

You were a part of the Douykas preseason for a week. What is your opinion about the Greek Champions and the level of the work they have made?

Doukas coaching staff Yannis Mostrios and Vasilis Koutsilas are doing fantastic job. They have a systematical approach to Futsal and they have a vision. No doubt Doukas has many great players and with support by their management they could become very competitive in Europe.

Can they be competitive in the champions League?

It’s hard to say where is the limit for this season, but for sure they can win the group in the Preliminary round. After that everything is possible.

Would you like to work in Greece some day, would you be open to such an opportunity?

Who knows, I am a professional coach and I am open for everyone. Everything depend how good the offer will be.

You work with the Finnish Mens National Team, how have they developed over the years, and what do you see in the future for them?

Finland improve a lot since Mićo Martić start as a head coach 2013. In Finnish FA have a strategy to develop all aspects of Futsal. Coaching education is a strong point of that project. Federation support Futsal department which is very important. I believe Finland has a bright future in Futsal and I am proud to be a part of that.

How mush different is training futsal compared to football?

Futsal and football are not enemies! More and more Futsal elements football players involve in his performance, also in a goalkeeping. Football stars like Ronaldo, Coutinho, Messi, Ronaldinho start with Futsal and said many times how Futsal improve his skills. Coaches from both sports should be clever enough to combine elements and improve his work.

What do you think is missing for futsal to become more popular and develop more in the mindset of fans?

In my opinion key word is MARKETING! Futsal people must start to spread “Futsal virus” all around and show to the audience and sponsors how Futsal is great and potential! Big step is a fact that Futsal take a part in next youth Olympic games this October in Argentina. Final step will be when Futsal become announced as a Olympic sport. 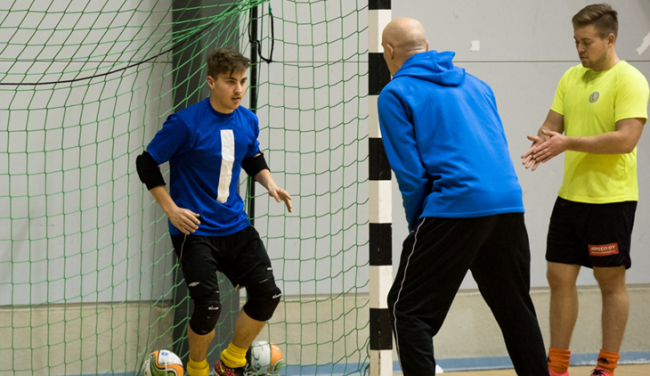